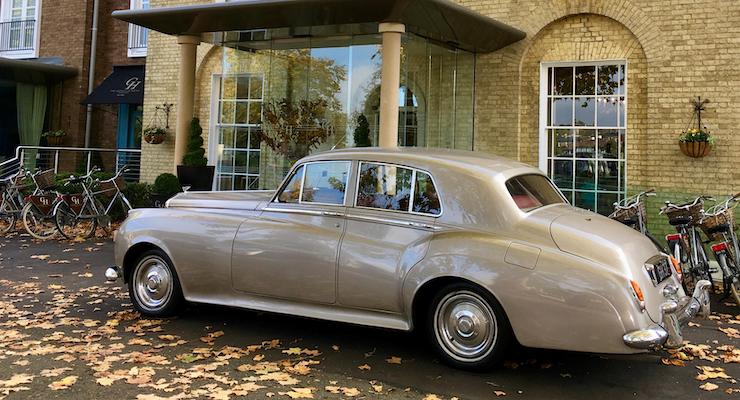 Where to stay in Cambridge: The Gonville Hotel

We drove to Cambridge from where I live in Surrey, and went straight to The Gonville Hotel in the city centre. The stylish and welcoming four-star hotel has a boutique country house feel. Dogs are welcome at the hotel, there’s a Bentley parked outside the entrance, and it’s right next to the green expanse of Parker’s Piece. (Interestingly, Parkers Piece is said to be the place where, in 1848, the first official game of football was played using rules which formed the basis for those which are used now.) I was visiting Cambridge, in the East of England, with a friend from Italy, and we stayed there for two nights. 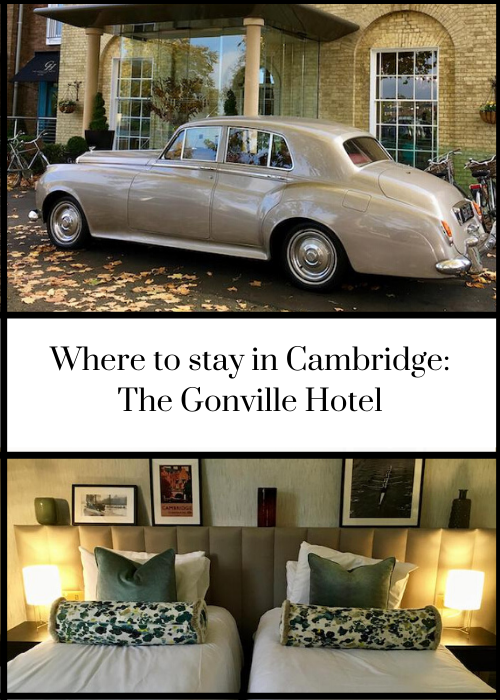 Rooms at The Gonville Hotel

Our comfortable and luxurious ground floor room was a Classic King/Twin with Walk-in Shower. With an iPad concierge, crushed velvet cushions and a pillow menu, the room felt cosy, modern and compact, and had just enough space for us without feeling cramped. The hotel also offers Superior rooms, which the website says are more spacious than the Classic rooms, as well as accessible rooms and some adjoining rooms. There’s free Wi-Fi throughout the hotel. 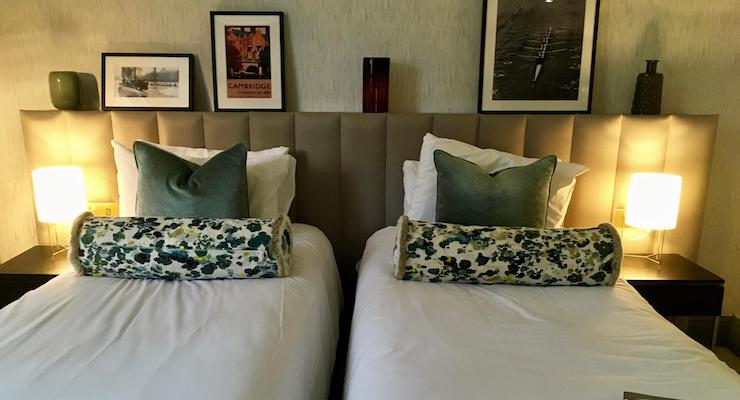 Breakfast at The Gonville Hotel

Breakfast at the hotel was very good. There was a self-service breakfast buffet in the hotel bar area, with all of the breakfast staples which you’d expect, as well as an a la carte table service. I ordered Eggs Royale (poached eggs on a toasted muffin, smoked salmon, home-made Hollandaise sauce) on our first morning and Scrambled Eggs and Smoked Salmon on a Toasted Muffin on the next, and both dishes were delicious and filling. My friend chose Pancakes with Maple Syrup and Nutella on both mornings, so I’m guessing that they were very good. 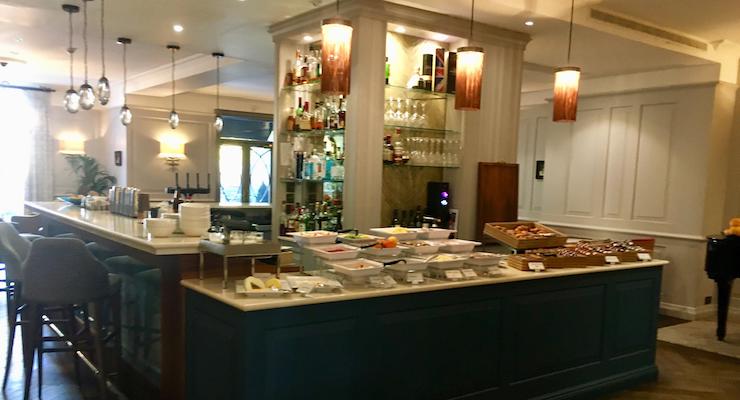 Dinner at The Gonville Hotel

We had dinner at the hotel’s Atrium Brasserie one evening, and it was very good. We had drinks in the comfortable bar before dinner. The Atrium menu offers dishes such as Fish & Chips with Hand Cut Potatoes and Tartare Sauce for £15 and 4 Pork Sausages with Creamed Mash Potatoes Yorkshire Pudding and Gravy for £12.50. We didn’t try it, but the hotel’s highly-rated Cotto Restaurant has a £75 three-course fine dining menu featuring dishes such as Gressingham Duck Terrine, Parfait, Spiced Apple & Plum Chutney and Rack of Salt Marsh Lamb, Thyme & Rosemary, Natural Jus. 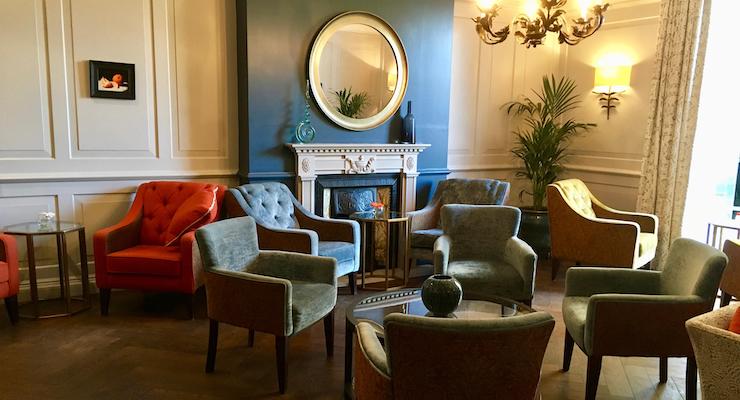 Parking at The Gonville Hotel

You have to pay extra for parking at the hotel – it has a small car park, and you can’t pre-book spaces there. If there are no available parking spaces at the hotel, you can pay tp park at Queen Anne Terrace car park just along the road, next to Parkside swimming pool.

Bikes at The Gonville Hotel

The hotel has city bikes which you can use during your stay, but we didn’t try them – I’m a nervous city cyclist unless there are safe, separate cycle lanes, as there in Copenhagen. 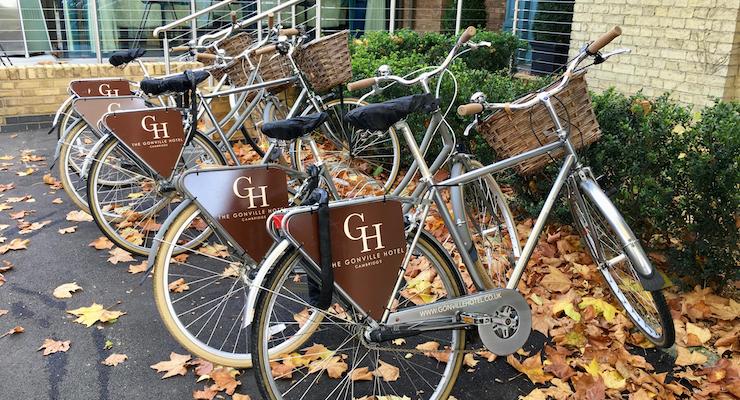 Would I recommend The Gonville Hotel?

The hotel was recommended to me by fellow travel blogger Emma from A Bavarian Sojourn. Emma said that she’d love to stay at The Gonville if she ever returns to Cambridge, and after spending a couple of nights there, I feel the same. I’d definitely recommend The Gonville as a great place to stay in Cambridge city centre.

Cost: We paid £323 for our twin room for two nights at The Gonville Hotel, plus £17 per night for parking and £15.95 per person per day for breakfast. 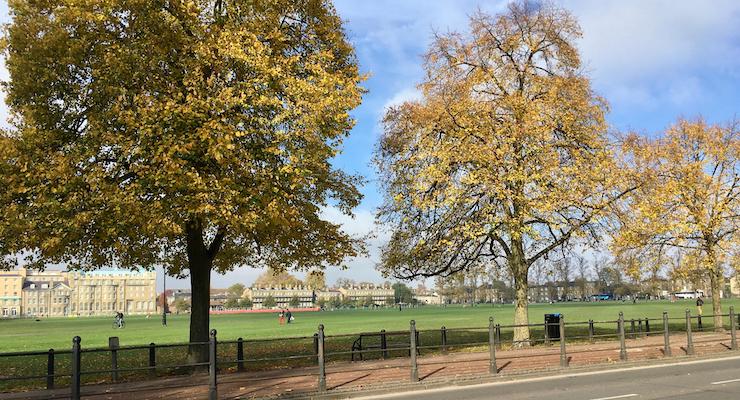 View across Parkers Piece from outside The Gonville Hotel, Cambridge. Copyright Gretta Schifano

You can read about what we did during our two-night stay in Cambridge in this post:

What to see and do in Cambridge: 2-day itinerary

Disclosure: This was not a working press or blogger trip, and we received no discounts or free of charge services. This post contains some affiliate links, which means that if you click through and make a booking I may receive a small commission, but it will make no difference to the price that you pay.