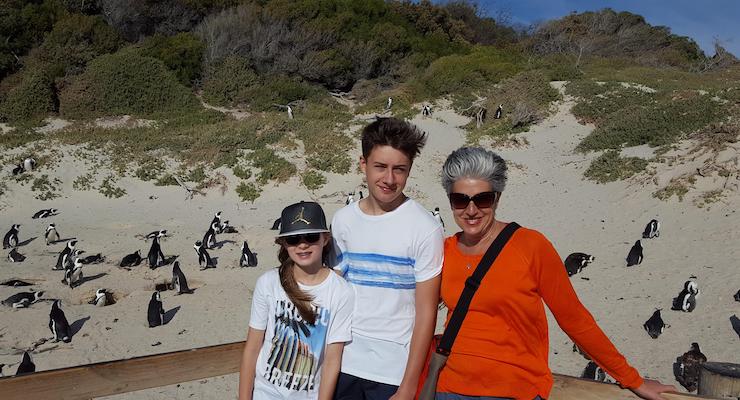 This post is by Anglo-Italian journalist Lorenza Bacino. In December Lorenza visited South Africa for a holiday with her husband and their two kids (14 and 12). The family spent six days exploring Kruger National Park (you can read about their experience in the post Family safari: Kruger, South Africa) and also visited the Cape Town area, which Lorenza writes about here.

“The dramatic scenery of South Africa’s south westerly coast is hard to beat. Waves crash and swirl on sweeping white sandy beaches, the warm wind blows for days on end and the mist curls down from the top of Table Mountain like spray from a waterfall.

We spent three days at the Cape, and during that time were in awe of its fantastic coastline, pretty seaside towns, surfing and…… African penguins! Yes, penguins live at the Cape and you can get really close to them.

The Simon’s Town penguin colony can be found at Foxy beach by Boulders beach on the edge of town. It attracts about 60,000 tourists a year and gets really busy in peak holiday season. We arrived early and found ourselves alone with the penguins. The area is protected and you need to pay a small conservation fee to access the beach. Wooden walkways guide you around and you get very close to the penguins. You can see how the younger ones shed their downy feathers in favour of adult plumes. They have become so tame that you can even swim amongst them and they’re a source of great pride for Simon’s Town. They are thought to number around 3000 nowadays, the first pair spotted back in 1983. They remain very endangered and you’ll notice a number of artificial nesting boxes dotted about the area in a bid to encourage nesting. Apparently, Boulders is the only place in the world where you can get up-close and we thoroughly enjoyed observing them waddling about and huddling from the wind. They sound like braying donkeys, which is why they used to be called jackass penguins! 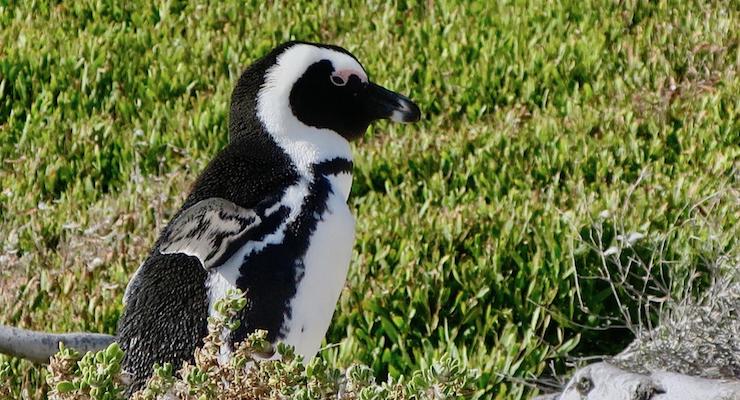 Simon’s Town itself is small and pleasant to walk around with its café life and quirky shops. Bertha’s restaurant down by the waterfront has good food and great views across the bay. You’ll find a range of stalls selling African arts and crafts and very likely enjoy buskers at your table.

Other pleasant seaside towns further up the coast include Glencairn and Kalk Bay. We particularly enjoyed mooching around Kalk Bay as it was full of fun vintage shops, cafés and restaurants. The pace here is slow yet buzzy, with a holiday surfy vibe. You can sip delicious Cape wines on the seafront and watch the surfers ride the breakers. In the right season, you may spot whales near the shore. We spent quite a bit of time in the Kalk Bay independent bookshop located on the main street. You can’t miss it. It’s really well-stocked with both local and international fiction and non-fiction. The interior includes comfy cushions for kids, wooden shelves and a stairway leading to more bookshelves. Along this trendy little fishing town’s cobbled side streets, you’ll find antiques and crafts, pottery, clothing, vintage and modern side-by-side. It’s rich in history and has a thriving arts and theatre scene.

The kids absolutely loved their surf lesson down at Muizenberg beach located a bit further up the coast from Simon’s Town. This long sandy beach is a surfer’s paradise and there are a few cafés where unwilling parents can sit whilst they wait it out. Unless you fancy being tossed about and thrown off your surfboard? I didn’t. It felt far too undignified and besides, my knee hurts! There are several surf schools on the seafront to choose from. We went with Roxy Surf School and the kids had their own teacher for the hour-and-a-half lesson. 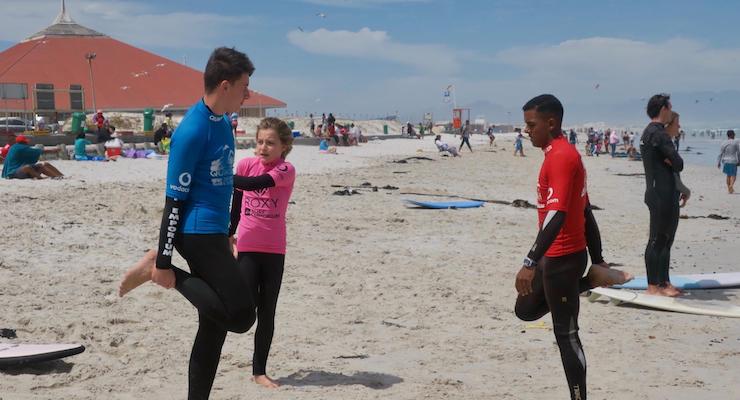 Chapman’s Peak Drive is a must-see. This nine kilometre snaking route between Noordhoek and Hout Bay is spectacularly beautiful albeit a little hair-raising at times, as it skirts the rocky coastline of Chapman’s Peak (593 metres). The peak also makes for a great hike if you’re feeling energetic (no, we didn’t and we weren’t!).  The route twists and curves hugging the cliffs, with sheer drops to the ocean below and views across to the windswept cape point beaches. The road took some really clever planning back in the 1900s and links Cape Town to its southern suburbs. Building began around 1915 using convict labour with the first part of the road opening in 1919. The whole route took seven years to complete. It’s still unstable in parts and prone to rock-fall and flooding and needs constant maintenance. During dangerous weather conditions, it’s likely to be closed. There are points along the way where you can stop the car and get out to take pictures, which I guarantee you’ll want to do!

It’s advisable to reach the reserve as early as possible. We arrived at around 9am and when we exited a couple of hours later, the queue was already several kilometres long and winding down the road.

It’s simply beautiful. We drove through the nature reserve, taking in the baboon troop lying lazily by the roadside, and spotting the ostriches further down towards the coast. 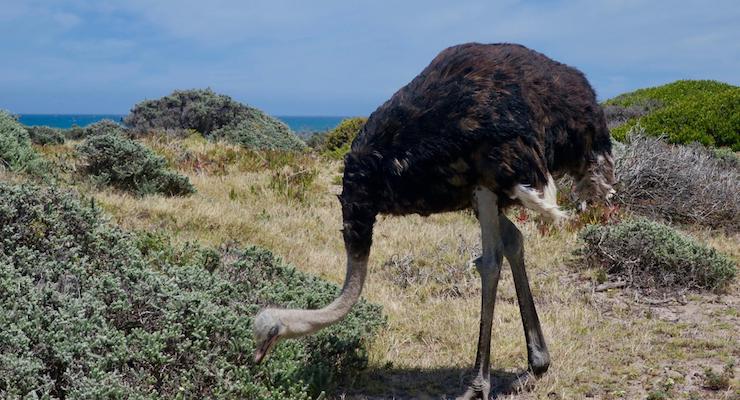 Climbing up to Cape Point Lighthouse with its windswept views across the coastline was a thrilling experience especially when you think about where you are – the most south westerly tip of South Africa with all its maritime historical legacy. The walk is not hard for kids and is two kilometres long, but the last part becomes a little arduous – well worth the effort for the 360 degree views.  There’s a funicular railway for those unwilling or unable to climb. You can actually spend a night or two in the reserve and there are several stunning hikes to do. Make sure you set out with a hat, water and snacks as some are quite long and the weather can be unpredictable! 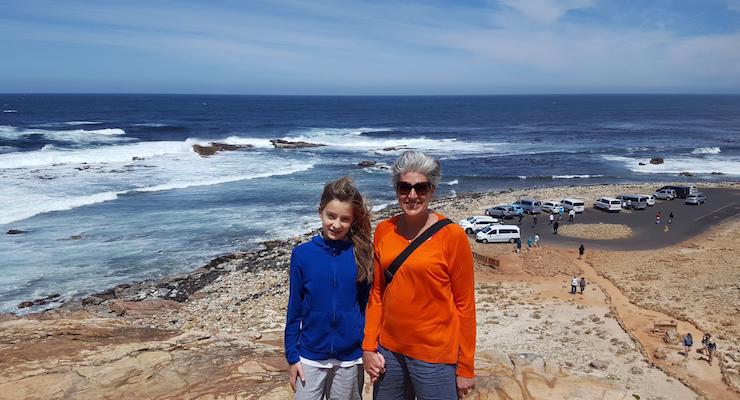 I’m not a fan of shopping, but this precinct at the waterfront in Cape Town is actually a really lovely area to explore. It’s built around the Table Bay docks on the Atlantic shore, so lose yourself in the arts and crafts stalls, jewellery, curios, leather goods and more.  And explore the wonderful food halls and restaurant options as this is still a working harbour with fishing boats bringing in fresh fish galore. We had a posh meal at the Harbour House Restaurant but the choice of eateries is endless. You can easily while away a morning or a whole day down here as there’s so much to keep everyone amused and interested. We enjoyed a ride on the Cape Town ferris wheel too – fun with practically no queuing involved. It’s 40 metres high and has about 30 cabins, which are even air-conditioned! The views of Cape Town and the vibrant waterfront precinct are great.

Just an aside – you may think V&A stands for Victoria and Albert, but it doesn’t. It’s Victoria and Alfred. Prince Alfred was Queen Victoria’s second son, and he visited the Cape Colony harbour in 1860, aged 16.

During our short stay at the Cape we stayed in Simon’s Town, which is a small naval base about a 45 minute drive from Cape Town towards the tip of the Cape Peninsula. Albatross Guest House is located directly up the hill on Victory Way, and is managed by the very helpful Andre as a small family business. The apartment where we stayed has two spacious bedrooms, each with a balcony overlooking False Bay, a living area, also with a balcony, and a small kitchen. We felt very comfortable there and enjoyed our sweeping bay views. Andre also organised and took us on our tour of the Cape peninsula, surfing and to see the penguins, and also offers wine tasting tours and can help with anything else you’d like to see or do.” 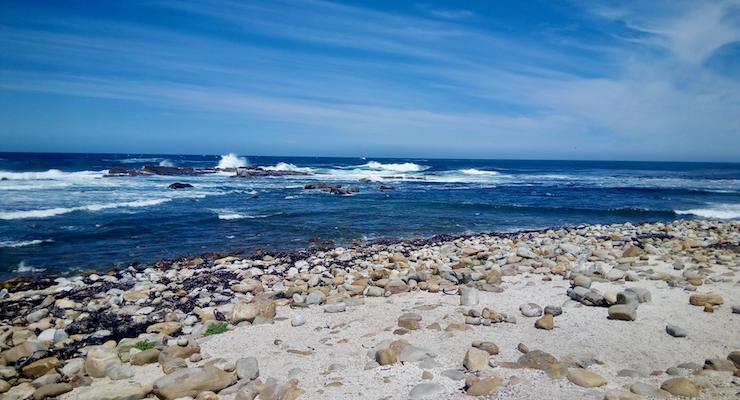 We were blown away by the scenery along the coast and found its wildness and beauty staggering. We would gladly return and extend our stay to explore more of this wonderful coastline and national park and include some wine tasting along the way……

Lorenza and her family stayed at Albatross Guest House as paying guests. All text, images and opinions are Lorenza’s own. 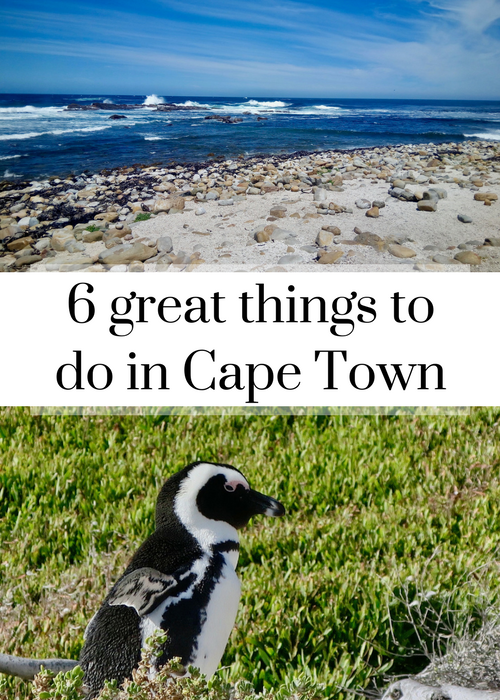