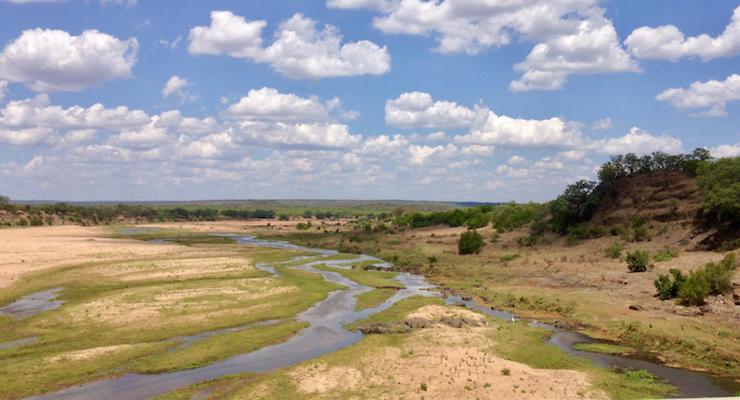 This post is by Anglo-Italian journalist Lorenza Bacino. You can read about her experiences in Cape Town here.

“In December, I was lucky enough to travel to South Africa with my husband and the kids (14 and 12) to stay with friends and experience the country as a local, which is always the best way, I find. We spent two weeks exploring the most beautiful places including a six-day stay at the Kruger National Park, which we all agreed was the highlight of the trip.

My daughter’s eyes were nearly popping out of her head, she was panting with excitement, barely able to breathe… ‘I’ve never ever seen an elephant that close’, she gasped. We had barely entered the Kruger to begin our drive to our first rest-camp, and already the wildlife was abundant. 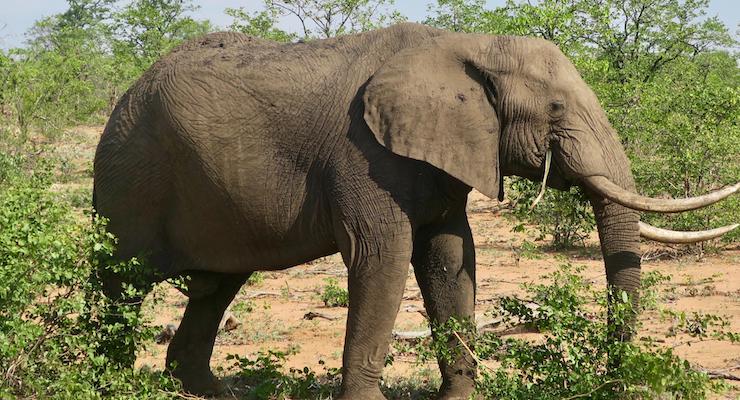 First came the enormous elephant, ears flapping and trunk swaying, eyes fixed upon our car, then the flighty zebra running in groups through the bush, pretty impala grazing by the roadside, a baby giraffe trying its best to reach the juiciest leaves at the top of a tree, distant wildebeest, and eland aplenty…Sitting high up in our jeep, nicknamed ‘The Beast’ by its owners, our Johannesburg friends, was exhilarating and perfect for game-spotting. The kids were ecstatic, the lack of wifi a distant memory. All they wanted to do was spot as much wildlife as possible. The competition commenced and the pages of their notebooks were feverishly filled with lists of animals and birds they’d spotted.

We’d left Johannesburg early in the morning and had been driving for most of the day. It was a long journey, but fortunately, the final two hours were spent driving through the park itself, in the late afternoon sun – a beautiful time of day – and this gave us a taste of what was to come. The scenery changed from dense bush, to open ground, to water holes, enormous boulders piled high in strange formations, and in the distance the mountains signalling the northern border with Mozambique.

In anticipation of our trip, our friends had filled the car up with fridges of various sizes with meat for the obligatory evening braai (barbecue), plenty of beer, fruit juices and wine! It turns out this was a very good idea, as we arrived at Mopani Camp tired and hungry, so it’s a really good idea to bring as much as you can of your own food. There are also excellent restaurant facilities available at the many camps scattered throughout the park’s two million hectares where we enjoyed some great meals whilst looking across the bush.

Kruger is one of the biggest national parks in Africa, offering some of the best wildlife experiences you can imagine. It’s roughly the size of Belgium, so you need to pace yourself and not try to cover too much ground.The days passed in a haze of game spotting drives, cooling down at the camp’s swimming pool, gazing out across the African landscape from the restaurant viewing points at various times of the day, binoculars glued to our eyes, staring in wonder at the submerged hippos, the lazy crocodiles resting on the river banks, the elephants crashing through the bush destroying all in their wake, and the baboons, travelling in packs and chasing one another across the veldt. A large group of maribou storks pottered around the river bank like hunched old men, taking refuge high in the trees at night to be safe from predators.

At Kruger, you are free to use your own vehicle for game drives any time except after dark. The speed limit is 50 km/h. After dark you need to book a game drive with a park ranger, which is great as they have the proper spotting torches for night time viewing. These organised game drives are available before sunrise, at sundown and after dark. Each time of day offers a different experience of the bush and we were extremely lucky in the amount of animals we saw during our three organised game drives. We saw such a variety of animals each time we went out. It’s also useful to go with the rangers as they know where to find the animals and can give you information about them if you’re interested. 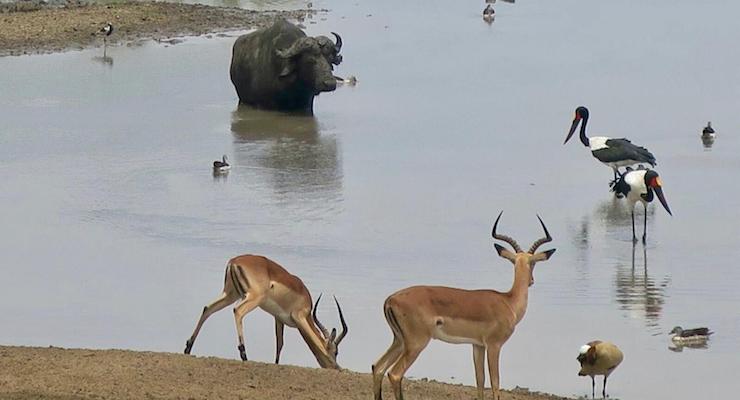 Our highlights included finding a huge leopard languishing in a tree during the heat of the day, a pride of 13 lions including cubs resting under a baobab tree, a pair of rare black rhino and a larger white rhino. There are charts at the camps where you can record what you see each day, and there is a special notice not to disclose the whereabouts of the precious rhino for fear of poaching. We were told the poachers come across from the Mozambique border, in helicopters, to plunder these endangered creatures. It’s an ongoing problem and very difficult to police.

We also caught rare glimpses of hyena, buffalo, ostriches, an enormous and majestic African fishing eagle, an eagle owl, even a jackal, the funny secretary bird, water buck and more.

I was utterly thrilled to see the children so engaged and enthusiastic, pumping the air when they spotted another animal, becoming experts in the types of antelope and birds they were seeing. It was a pleasure not to be bugged about wifi (there just wasn’t any, and we all forgot about it), and bird and animal books were devoured and scoured to find the right name for each creature.

In the evenings, we gathered around the braai and enjoyed family meals together in the moonlight, the night creatures flitting around us, bats in the kitchen sink, tree squirrels hidden in pillowcases. 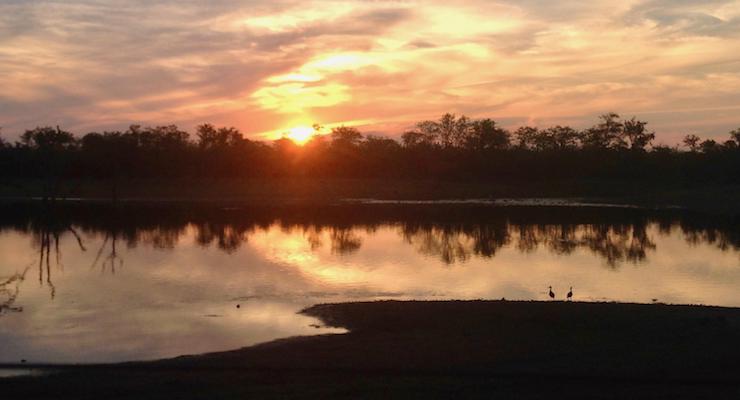 One afternoon, we were treated to a tremendous storm, lightening streaking across the sky in the distance, then rather too close by for comfort, thunder punctuating the silence and rain drops spattering on the ground and swelling the river. After a couple of hours, water began swirling down and filling the river bed, the water buck grazing on the exposed sand hills had to make a swift getaway to avoid being swept away, the baboon tarantula scurried for its nest.

We all agreed this experience has been one of our best family adventures ever and as parents, we saw such enjoyment from our children. We have no doubts they will remember this trip for a long time to come. 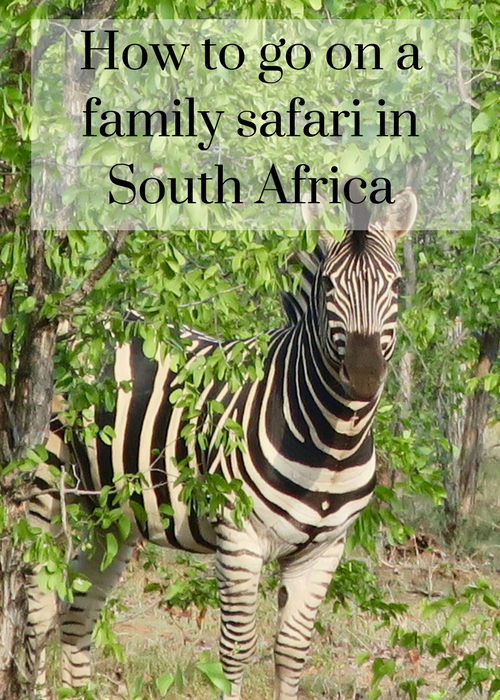 There are several rest camps dotted about the park in various locations, including basic campsites for tents and caravans, huts with communal cooking and bathroom facilities, safari tents, bungalows and cottages which range from single to family and guest cottages. Guest houses and Lodges are large multiple bedroom units with fully equipped kitchens and an exclusive view. Fees vary depending on the time of year, but the Kruger is an extremely popular destination so it’s advisable to book well in advance, especially during peak times.”

Lorenza and her family and friends spent three nights at Mopani camp and two nights at Letaba camp in Kruger National Park, South Africa, as paying guests. All text, images and opinions are Lorenza’s own.