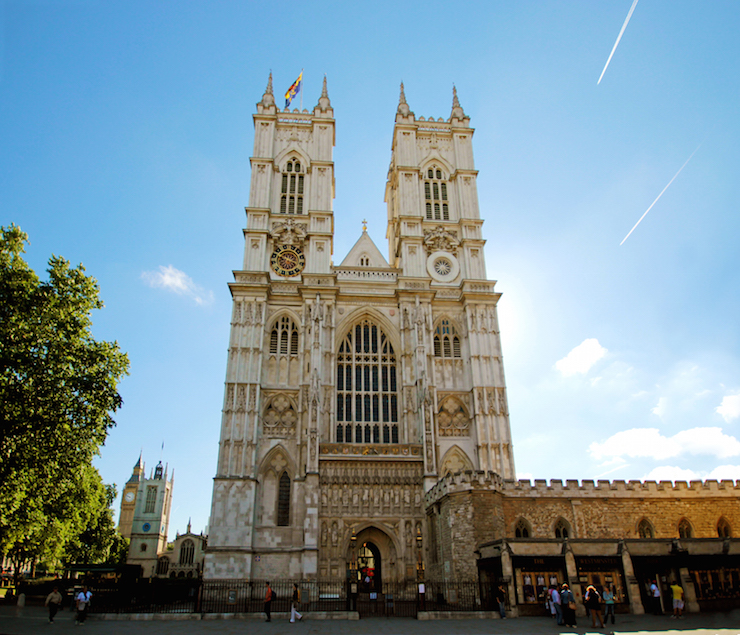 I’m reviewing a new guide book series- Marco Polo Spiral Guides…  – and one of the first things that I see in the London book is a Top 10 list of the most important sights in the capital. At the top of the list is Westminster Abbey.

I’ve lived half an hour outside of London for most of my life, I go there often and I think that I know it well. Yet I’ve never been inside Westminster Abbey, a UNESCO World Heritage Site and the place where Kings and Queens have been crowned for nearly 1,000 years. I determine to go there as soon as possible.

The next day as soon as the kids are off at school I walk the dog and then head to the station to catch the train to London. Once in the capital I take the tube to Westminster and walk past the Houses of Parliament and across Parliament Square to Westminster Abbey.

From the outside the Abbey is a vast, gothic structure with turrets and towers. I queue for a couple of minutes to get in at the Great North door. I have a press ticket for my visit but I think that the entry price is quite steep: £20 per adult and £9 per 6 -16 year old child (it’s slightly cheaper if you book online and younger ones are free if they’re with an adult). Once inside I collect my free audio guide and printed map as well as a children’s trail with a clipboard and pencil so that I can see what’s on offer for visitors with kids in tow.

I stop and stand and look around and am amazed by the grandeur and beauty of the place. I don’t know what to look at first. There’s a vast vaulted ceiling, there are inscriptions on the floor and walls and there are tombs and statues all over the place. A man in a green gown, a volunteer guide, asks if I need any help. We chat and he tells me that the Abbey is a ‘Royal Peculiar’ which means that it belongs directly to the monarch and is independent of the Church of England. This means that it’s self-supporting – which is why the tickets are so pricey.

He shows me the children’s trails printed in several languages including Italian, Spanish and French and tells me that everyone who completes one of these trails receives a Westminster Abbey chocolate coin. This sounds like an excellent way to help parents to chivy their children around the Abbey. For a problem that I find when visiting amazing historical places like Westminster Abbey is that I want to look at everything and read every sign while my children generally don’t. (And neither did I want to as a child). So, children’s trails, chocolate and other bribes and distractions –  bring them on, they’re all good if they engage children and help families to visit historical places. 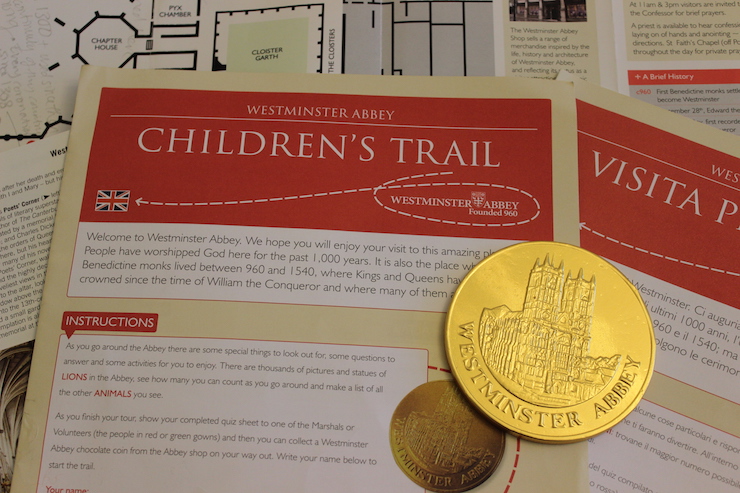 I use the map and audio guide (narrated by Jeremy Irons) to follow a route around the Abbey, looking at the Children’s Trail as I go along. I walk along the nave to the Great West Door, the one used on official occasions like coronations and Prince William and Kate Middleton’s wedding.

Grave of the Unknown Warrior

Just inside the door I see a group of small boys clustered around a poppy-edged black slab on the floor. The audio guide tells me that this marble slab covers the grave of the Unknown Warrior, the body of a serviceman brought here from France in 1920 to commemorate the members of the armed forces who died in the First World War. The boys listen solemnly as their teacher explains that this is the most important of all of the tombs at the Abbey, more important than those of any of the Kings or Queens or famous people. I like this teacher.

I walk back along the nave through the Quire and up to the High Altar. This is the actual place where Kings and Queens are crowned (I’d love to have come here as a child and played Coronations with my siblings. There should so be a huge Royal dressing up box here). Starting with William the Conqueror in 1066 most of the country’s monarchs have been crowned at Westminster Abbey. Since 1300 they’ve all used the chunky, wooden Coronation Chair for the event. This chair is behind glass at the end of the tour so you can only see it from a distance. 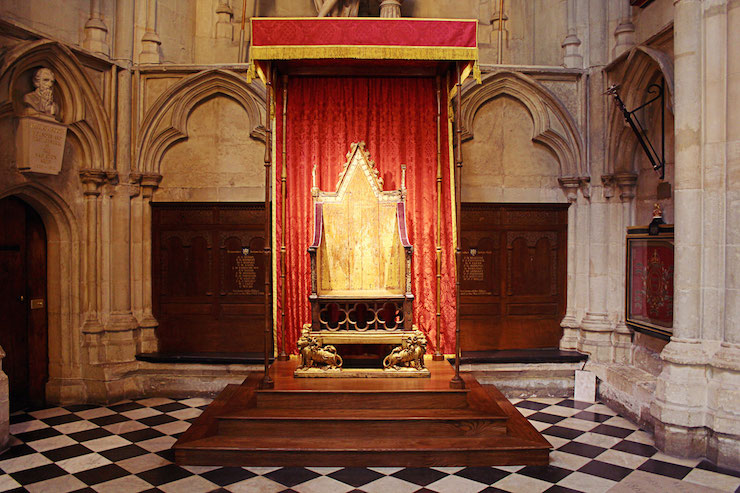 Behind the High Altar is a series of amazing chapels with tombs of people that kids may know from Horrible Histories such as Elizabeth I, Mary Tudor, Mary, Queen of Scots and Edward the Confessor. At the eastern end of the Abbey is Henry VII’s Lady Chapel, a beautiful Medieval structure with a vaulted ceiling which was said to be ‘the miracle of the world’ when it was built. Behind this is a small chapel with colourful stained glass windows dedicated to the men of the Royal Air Force who died in the Battle of Britain between July and October 1940. There’s still a hole in the stone of the chapel wall, now covered with glass, from bomb damage that same year.

After the chapels the next part of the tour is Poet’s Corner where many famous writers such as Dickens, Chaucer, Shakespeare and Hardy are buried or memorialised. After searching in vain for any women writers apart from the Bronte sisters, George Eliot and Jane Austen I hand in my audio guide at the collection point and head out to the cloisters.

I go into the octagonal Chapter House and I’m struck by the vivid images on the walls which were painted around 1400. They show religious scenes as well as animals and birds. Apparently this room was used in the thirteenth century for daily meetings by the Benedictine monks who lived here. It was later used for meetings of the King’s Great Council and the Commons, forerunners of today’s Parliament. The Children’s Trail says that one of the doors in the Chapter House is the oldest door in England. I look this up later and find that the door is nearly a thousand years old. The next room is the Pyx Chamber where the monks and the King used to store their treasure. 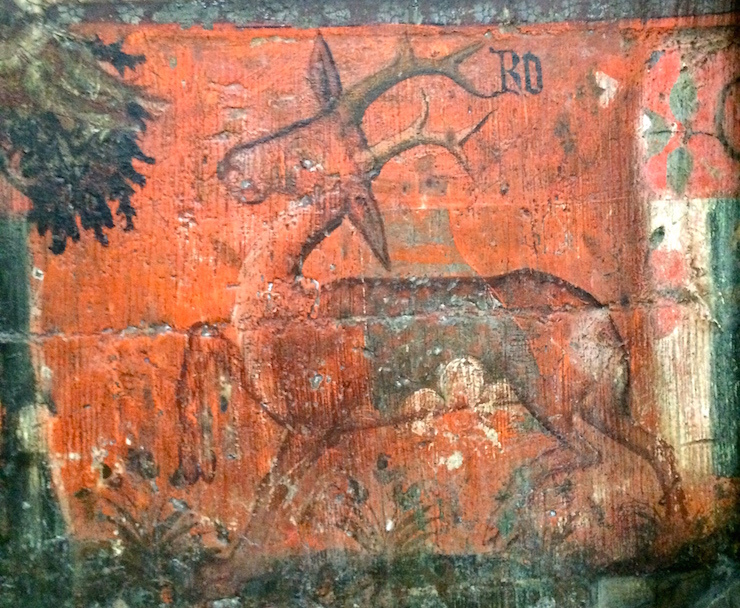 The Abbey Museum has some interesting exhibits including a practice set of Crown Jewels, presumably for future Kings and Queens to practice with before their coronations. Marvellous. At the museum kids can borrow an outfit and dress up as a monk to have a photo taken in the cloisters (I mean no disrespect to monks but it would be great to have crowns and Royal outfits for kids to dress up in too).

I leave the museum and follow a passageway to the college garden. It’s a large, enclosed grassy space bordered by flower beds, paths and benches. I have the garden to myself on this February day but I imagine that this must be a lovely place to relax with a picnic when the weather’s warm. I check later and am told that visitors are welcome to sit on the grass with their lunch and that there are free lunchtime brass band concerts during the summer as well as a range of family activities such as learning to dance for the Queen, making a crown or learning to be a knight.

I head back into the cloisters and find the bustling Cellarium Cafe in a vaulted room. The cakes look tempting but I need to head home. I follow the signs back into the Abbey, past the Coronation Chair and, inevitably, out through the Abbey Gift Shop. 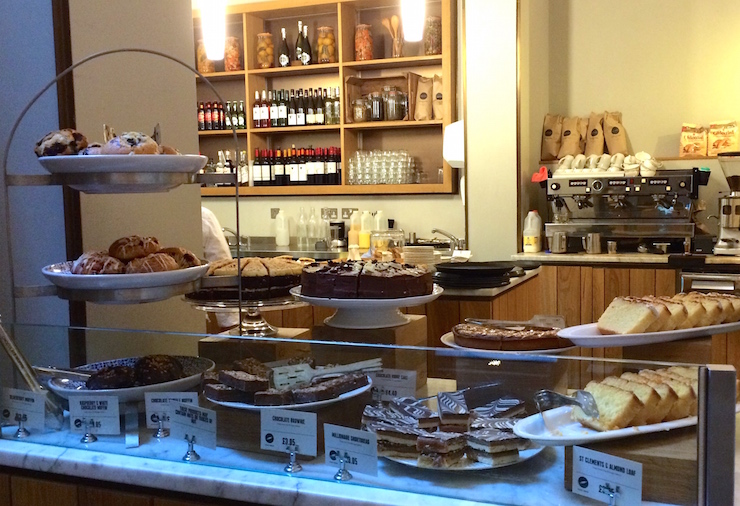 At the shop I hand in the clipboard and pencil which I was given with the Children’s Trail and the serious lady behind the till insists that I accept a very large Westminster Abbey chocolate coin in exchange. Fair enough.

I’m really pleased that I have now visited Westminster Abbey and I’m sorry not to have done so sooner. It really is a fascinating place. If I were on a sightseeing tour of London I’d definitely take my children there as it’s such an important historical place. But they would need chocolate to get them there. And a trip to a cafe or a picnic afterwards.

Tickets to Westminster Abbey cost £18 per adult, £8 per 6 -16 year old child (younger ones are free if they’re with an adult), £45 for a family of two adults and two children if booked online. Tickets cost slightly more on the door. There’s no charge for people who are visiting the Abbey to pray or to attend religious services. Visitors with babies and young children are welcome to take a pushchair into the Abbey. Keep an eye on the Westminster Abbey website for details of summer family events.

Disclosure: I was given a ticket for Westminster Abbey for the purpose of this review.

I’ll be publishing my review of the new Marco Polo Spiral Guides next week and there’ll be a chance for 10 Mums do travel readers to win a book of their choice from this series. Have you ever been inspired by a book to visit somewhere on your doorstep?